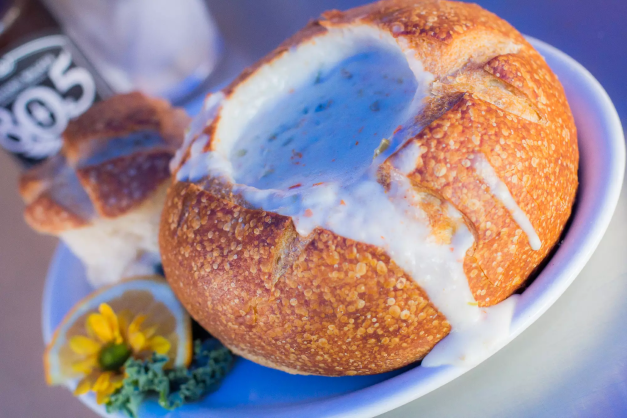 There are few things as comforting as a piping hot bowl of warm clam chowder on a winter’s day! Celebrate with a small steaming hot cup or big ol’  bread bowl on National Clam Chowder Day on Friday, February 25 at Ventura Harbor restaurants. Trust us, your taste buds will thank you!

To celebrate, we are giving away a total of $250 in gift cards to local chowder lovers (TEN winners will be selected at random to receive their own $25 gift card to a Ventura Harbor Restaurant that serves clam chowder)!

Note – you must be following @VenturaHarbor social media accounts to be eligible to win! If selected, you must be able to pick up prize locally in Ventura Harbor. Winners will be contacted by March 4th. Keep an eye on your direct messages! Must respond within 24 hours to claim the prize.

Water’s Edge Restaurant & Bar– The House Clam Chowder begins with applewood smoked bacon, onions and celery. The pot is then deglazed with cream of sherry wine to give soft, sweet notes. The pot is glazed again with clam juice and brought to boil. Lastly, baby clams, bay leaves, and heavy cream are added to thicken the chowder. Stop by for a free cup of clam chowder with any entrée.

Harbor Cove Cafe– The famous New England Clam Chowder is made just like your grandmother used to make it. This chowder starts out in a large pot and is served piping hot either in a cup, bowl, or even a bread bowl. Don’t forget to stop by and try the famous Chowder available all year long!

Le Petit Bakery and Restaurant– Bon appetit! With a classically trained French chef, the clam chowder at Le Petit is bound to be one of the most creamy and delicious hot chowders around. Catch it on their daily soup rotation!