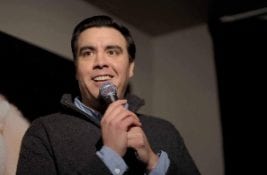 Jeff Urrea is a modern American stand-up comedian performing out of fabulous Las Vegas, Nevada. Standing at 6’4’ tall, Jeff has a larger than life personality and Mexican last name that no one can seem to pronounce. Jeff Urrea (oo-rr-EH-aa) was raised as a 90’s kid in the small town of Fillmore, California. Jeff’s love for cinema, entertainment and Star Wars led him to study Film and Media at U.C. Santa Barbara where he began his stand-up career in 2007. While he should have been studying, Jeff founded “Laughology,” the first weekly stand-up comedy production at a U.C. Campus.

After finding his true calling as a comedian, and running out of student loan money, Jeff moved back home to Ventura County where he spent a majority of career living with his Mom and working at the Ventura Harbor Comedy Club. Jeff began his work for club owners Randy Lubas & Andres Fernandez as a free intern in 2009 and earned his promotion to General Manager by 2013. Jeff was able to fill a variety of roles during his tenure at the Ventura Harbor Comedy Club.  Like a one-man band, Jeff would fill in as an emcee, feature, bartender, sound engineer, cook, box office attendant or any other role that required the “show to go on!” Jeff gained a ton of experience and weight at his home club. There he was able to work with some of the best talent in show business. Jeff made his television debut on NuvoTV’s “Stand Up and Deliver,” in 2013 during, has been featured multiple times on the “West Coast Comedy Show,” and “Not Your Average Stand Up.” To see Jeff live on stage, or to book him for your next event, please E-mail him at [email protected] or visit his website www.JeffUrrea.com