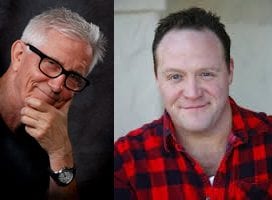 Lenny Schmidt is one of the Top headliners in the country with countless appearances on TV including HBO< and Comedy Central. He is one of the most requested comics working on cruise ships.

Fritz Coleman was a hilarious comedian before he became our favorite Weatherman! He has appeared many times on The Tonight Show and has opened in Las vegas for many stars including Ray Charles!

Celebrate New Year’s Eve as if you are in Time Square with a countdown at 9:00. (Midnight in New York!)
The full dinner package will include a superb Catered Dinner, Champagne Toast, Party Favors, and Noisemakers!