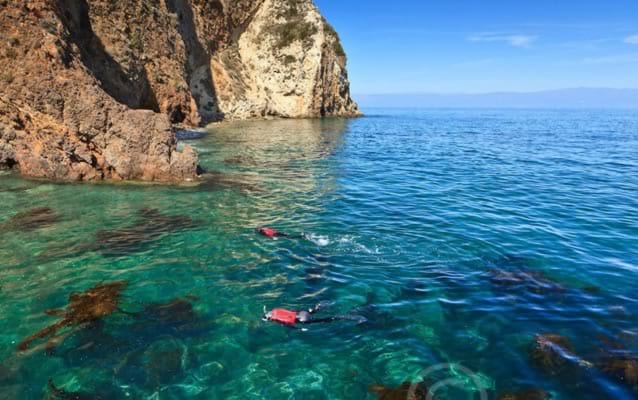 This weeks Topic: Peregrine Falcons Recover on the Channel Islands

Ventura, CA —Dr. Peter Sharpe will discuss the remarkable recovery of peregrine falcons on the California Channel Islands during the November From Shore to Sea lecture. Today there are over 50 resident peregrine pairs, well in excess of the peregrine population in 1955 when they disappeared from the islands.

Sharpe conducted a survey in 2016 and found peregrine nests on all eight of the Channel Islands. He identified 46 different breeding territories with at least 57 chicks known to have hatched. Their recovery has been dramatic with an average of 66 chicks hatching each year since 2013.

Historically, peregrine falcons were common residents on all eight of the Channel Islands with an estimated 15-30 pairs. Their numbers plummeted across North America in the late 1940s. In his presentation Sharpe will review the overwhelming evidence that the cause of their decline was likely due to DDT contamination.

Working for the Institute of Wildlife Studies, Sharpe has directed peregrine falcon monitoring and the bald eagle restoration program on the Channel Islands since 1997. Additionally, Sharpe has taken part in the research and management of other species, including the island fox, golden eagle, osprey, and loggerhead shrike. Sharpe received his Ph.D in Zoology from Colorado State University in 1998.

About “From Shore To Sea” Lectures

The “From Shore to Sea” Lecture series is sponsored by the Channel Islands National Park.  The Purpose of the series is to further the understanding of current research on the Channel Islands & surrounding waters.  Past lecture topics have included the recovery of the sea otter populations in southern California water, the French & Italian heritage of Santa Cruz Islands, survival strategies of open water fishes, new approaches to understanding kelp forest ecosystem health and park efforts to restore the Prisoners Harbor wetland.

The lectures occur at 7:00 p.m. at the Channel Islands National Park Robert J. Logomarsino Visitor Center, 1901 Spinnaker Drive in Ventura Harbor.  The programs are free and open to the public.  They may also be streamed live at:  Channel Islands Live Broadcasts (//chis/planyourvisit/live-programs.htm).

Past lectures may be viewed or downloaded by visiting

The next Shore to Sea Lecture is December 14 on Santa Rosa Island Mammoth Discovery by Justin Wilkins.