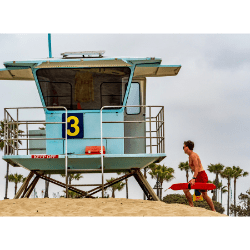 As the summer season approaches, daily lifeguard service will be provided at Ventura Harbor beaches along Spinnaker Drive.

In a unanimous vote on April 21, the Board of Port Commissioners authorized the General Manager of Ventura Harbor, Brian Pendleton, to contract with State Parks to provide lifeguard service from May through September at Harbor Cove, South Beach, and Surfers Knoll beaches. The approved 2021 lifeguard contract of $136,802.37 will provide the adequate coverage to each of the three Ventura Harbor beach areas over a five-month period.

This year’s contract is anticipated to include 4,160 work hours between May 1 and September 30, a 38% increase of coverage hours over 2020, which reflects a growth in annual beach use, expanded lifeguard coverage, lifeguard salary adjustments, and a roving supervisor vehicle included in the coverage. The additional hours also increase the coverage at Harbor Cove Beach to two lifeguards on holidays and weekends during peak season, weekend only lifeguard coverage in May until Memorial Day weekend, and daily coverage the remainder of the season.

“The Board of Commissioners for the Port District believe this investment in public safety is important,” stated Ventura Port District Harbormaster John Higgins. “Additional lifeguard hours and coverage has been included due to higher visitation numbers at Ventura Harbor beaches to better assist with visitor safety.”

For over 60 years, State Parks has provided professional lifeguarding services along California’s coastline. The Ventura Port District took the lead in securing summer lifeguards at the Harbor in 2011. The Ventura Harbor Patrol and State Park Lifeguards have formed a strong and effective partnership in providing public safety on land and in the waters along Ventura’s coast.

The Ventura Harbor Patrol and the State Parks Lifeguards have over the years, performed many rescues, and prevented numerous serious incidents. The beach had historically high visitors and challenging conditions, but because of the Ventura Port District’s investment most rescues were routine in nature. In fact, the Lifeguard service continues to provide better preventative care through education and has reduced the number of circumstances where first responders are also at risk. The Harbor Patrol and State Parks Lifeguards have grown a strong and effective partnership in providing public safety on land and water areas throughout the Ventura coastline. Both agencies participate in cross training and assist each other throughout the year on routine and emergency calls.

Ventura Harbor and its beaches have become among the most popular summer destinations in the city. Parking and restrooms are available at both beach parking lots, EV charging stations at Harbor Cove Beach sponsored by SemaConnect, and street parking is available on Spinnaker Drive.

In addition to the beaches’ safety and convenience, annual Harbor dredging results in some of the best sand on the local coast. Also, the location affords a variety of healthy outdoor summer activities and close access to the Harbor and its many amenities.
“Ventura Harbor is one of the few locations in Ventura County that provides a complete user experience,” said General Manager, Brian Pendleton.” Our harbor, beaches, merchants, national park headquarters, sport fishing boats, dive boats and Island Packers give the visitor tremendous value and entertainment in one intimate location.”

For questions on lifeguard times, call the State Lifeguards Dispatch at 805-648-3321 and for Ventura Harbor beach details visit VenuraHarborVillage.com.